WHO FRAMED THE KING? 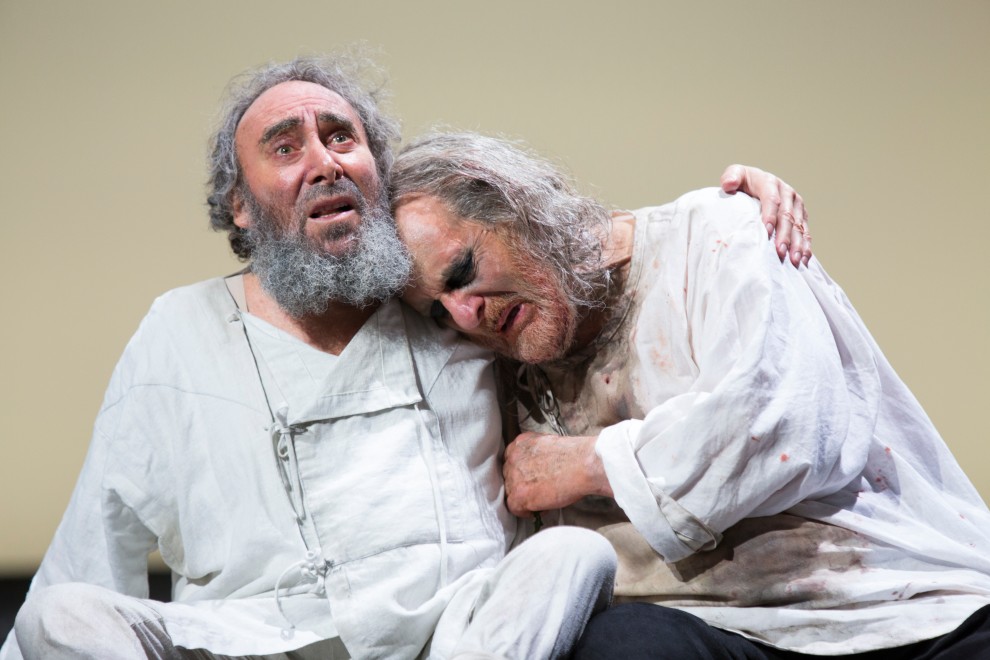 Andrew Graham Dixon’s article in the programme made me realise why the RSC’s coldly magnificent King Lear stumbles in trying to make us see, and feel too. As the art critic says, Lear is all about blindness and seeing, the loss and recovery both of perspective and true moral vision. Whether or not England had been ‘blinded’ during the Reformation, with the whitewashing of frescos and Religious paintings, so its dislocation from thousands of years of history and experience, or only through that could discover an entirely new way of defining reality: The hard Modern World.

Sight though, in all its meanings, is epitomised in the myopia of the mighty King, and ultimate father figure, failing to read the cynical language of his ambitious daughters Goneril and Regan, in his unnatural parental search for the unconditional, as Lear abdicates responsibility and divides his Kingdom and himself. With his banishment both of his favourite daughter Cordelia, for refusing to unpack her true heart with words, and the loyal Kent for defending her.

Metaphor becomes physical fact in the vicious blinding of Gloucester, played admirably by David Troughton, and achieved in Niki Turner’s bold designs by placing Gloucester in a huge glass interrogation box, worthy of The Cube, symbolic both of trial and the  separations of blindness and madness, that soon becomes smeared with his and Cornwall’s blood, as an eyeball bounces off the pane. The odd giggle in the audience was either a reflection of deep unease at real horror, or our own desensitization in a world that sees so much in film and the news. Yet for all the agonies of Lear, the blinding is a very specific act indeed, far from the simply bloodcurdling violence of a play like Titus Andronicus. Shakespeare is very rarely pornographic or gratuitous. In fact the real horrors of Lear are about the inner agonies of mind and imagination, when truly exposed to the whole world. Just as Edgar’s disguise as Poor Tom imagines suffering, and the Foul Fiend too, as much as experiencing them, in an act of feigned madness akin to Hamlet’s.  Lear’s is not quite an arbitrary moral Universe either, just a blasted heath, since Lear’s vanity and Gloucester’s fatherly hypocrisy to his bastard son Edmund, not stressed enough by Troughton, directly unleash what always potentially lurks beneath and engenders the attempts at Judgement and search for poetic Justice. Or rather it puts them on trial too, whether more sinned against than sinning. In the vexed paradox too that if the truth of the World really is violence and the abyss, why should you not be as amoral, vicious or corrupt as the next man?  Pre-empting Nietzsche’s remark that if you stare too long into the abyss, you will find it staring back into you.

So to Lear’s journey towards recovering humanity, or death, his travels with his fool and encounter with Gloucester, after Edgar’s leading his father to a faked suicide on the beetling cliffs of Dover. Graham Dixon quotes Frank Kermode calling that “the most beautiful scene in all Shakespeare” and so it may be. It is more than that though, it is part exorcism and precisely what Shakespeare has Edgar call it too, “a Miracle”.  Or an attempted human miracle, in a now Godless Universe. In that Gillan Doran’s sparse, metallic and pointedly pagan production, raising Lear on a great plinth at the start, among a painted Sun and eclipsing Moon, and their inevitable, ceaseless peregrinations, in an age that still profoundly credited astrology, and used it as excuse, prepare for Anthony Sher’s studiedly formal but now ultimately impotent invocations against his daughters, or the World. Lear as King Priest too, though curses in Shakespeare usually turn on those invoking them.

It also might frame the play in terms of how others have described King Lear, as old fashioned Miracle play, banned in the secularisation of the Reformation, springing from a profound tension in Shakespeare’s own rooted ‘Religious’ instincts, although that is not its main purpose here. This Lear certainly approaches the grandeur of the Miracle cycles, yet the miracle Shakespeare tries for, and so must the actors, is now a secular and imagined one, like Coleridge’s Ancient Mariner forging its own language of artistic symbolism, reached with only the artistry of mind and language itself, balancing journeys of inner and outer perception and perspective.  Also as Coleridge did, making the distinction between mere fancy and true imagination, which can only be touched with real feeling. Just as Shakespeare’s poetry and vision, the stamp of his imaginative wonder, is always a constant movement between the minute and the universal, a specific act of ‘seeing’ and almost physical entering in, akin to Keat’s “negative capability’. So Edgar leads his father Gloucester through a frustrated act of self-slaughter, in an almost Christian sacrifice to the absent Gods we fear treat us like flies, then provides a minutely precise rebalancing, in describing what did not happen, now from the bottom of the abyss. So reimagining everyone’s place in the Universe, in the recovery if not necessarily of hope, then at least perspective. “Half way down hangs one that gathers samphire, dreadful trade! Methinks he seems no bigger than his head”.  It is an act of profound psychology that could give rise to the very word Shrink.

Of course, as Graham Dixon also compares Shakespeare and Lear to the arrival of an artist like the blood spattered Caravaggio, though still connected to Christian and Catholic iconography, Shakespeare is a painter too, but with words, in what was the Age of the Word, as opposed to ours of the image. It is a given then he was and is the greatest word painter who ever lived. Therein lies the rub though, if one you might expect from a strong director like Gillan Doran, also Artistic Director of the RSC. Doran’s production does not cleave enough to the source power of Shakespeare’s language and poetry, and his players discovering them in the intimate act, always the route in my view, through every character, to his ultimate vision and meaning.

Instead, ala Graham Dixon, Doran presents this Lear as almost a series of set piece paintings; Lear on his un-heavenly dais, Lear on a chariot-funeral bier that presses forwards on the essentially framed Proscenium stage, Lear at dinner with his fractious Knights, or a back-lit static battle scene that evokes the Bayeux Tapestry. The tree at the back seems to be trying to win the Turner Prize. If words always paint pictures, a play is not a painting though, it springs alive from the frame, as living theatre.

The production, which seems to have been a sell out, is startling and innovative, at times, like Lear and his fool raised again into airy nothing, not in the calm eye but the curled tear of a swirling storm. It is also somewhat superfluous, because that is exactly what Shakespeare is explaining, through the Gloucester moment, and Lear lost on the Heath, with the movement of his own language and ‘vision’; the nature and miracle of imagination, and how to see in balance again, or go Mad.

For me Lear’s true miracle then should still be achieved through the unaccommodated intimacies of the round, both the humanisation and de-humansisation of suffering, the humbling encounters with Everyman, framed by the world’s blasted heath, not something so distant and lofty. That is what ultimately rakes the heart and dislocated soul, pierces the hurt mind, and might turn terror to tenderness, to make it a play that really is a miracle of creative humanity. Also how Dr Johnson described King Lear though, and which this production is frustratingly not, namely “unbearable”. Instead it remains for me a rather cold tableaux, admittedly exacerbated by my restricted-view seat up in the ‘Gods’.

Sher is of course a marvellous actor, but only truly recovers Lear’s magnificent humanity in the second half, now a foolish, fond and human old man, but if a fool, one with a new wisdom and beauty. Too late to save him and Cordelia, but such is life, if the play or art cannot humanise or change us, and perhaps anyway. The point too though is that for all Lear’s kingly tyranny, what is at times obscene in his life denying cursing of his own daughters, engendering that terrible Nothing, he must also have the love and greatness of the Father King, to elicit the loyalty of the morally positive characters in the first place. Sher is not allowed to show that nearly enough in the long first half, despite the original and intense clinches with his ‘bad’ daughters, an actor who certainly could. Let the actors burst from the frame.

Perhaps that is why the others seem at times dislocated from one another too, in their own frames, and what are vital and very intimate transformative journeys. Which must be enacted with a commitment and love too that raise them to the spiritual and mystical, not the somewhat throw away joke by Oliver Johnstone’s Edgar, preceding Gloucester’s jump, nor Cordelia’s unsymbolic recitation of a bunch of herbs. Cordelia, played by Natalie Simpson, is at once very flesh and blood and symbol of Shakespearian earth magic, as Kent is of a neo Christian duty. I shed a tear at Lear’s description of her death, yet had not been able to love Cordelia, as you must if the play is also to achieve an insight Shakespeare is obsessed with throughout his work, the danger to the powerful masculine if the positive and honest feminine is ripped away, inside or out. That is often the very route to violence, inflation and madness. Also grounded in the story of a mythical character never really mentioned but profoundly operative in Shakespeare, also a story of sight and blinding, King Oedipus.

For me Graham Turner’s fool has skill but is too belligerent to be lovable either, first by shrugging off the audience, to break the fourth wall, and secondly in not truly discovering that tenderness that constitutes some act of healing of the Self too. What is also lost is the seething power of the sub plot, driven by the primal forces of youth and sexuality, along with those ‘New Men’ in a violently changing Elizabethan world, that can make Lear cry “let copulation thrive”. Paapa Essiedu’s Edmund is not bad, but too coy. Edmund is a life force, if a death force too. You must, in Edmund’s “now God’s stand up for bastards”, somewhere want him to succeed, as if you too would overturn the Monster Custom and an unjust and blind social order, even though the consequences may be too horrible to contemplate. It is Lear’s profound question about what Nature and human nature truly are, for Nature was Shakespeare’s Goddess too, but one that would come to cause him a lot of trouble. Essiedu gives Edmund far too much moral doubt at the start then, perhaps to justify his later attempt to save the King and Cordelia. The agony of the play must achieve that understanding and change by earning it, not pre-empting it. With a magnificently visual King Lear then you still want to come out sobbing, not left intellectualising about a walk through the Tate Modern, for as Lear comments “Life’s better at breaking hearts than art is.”

Filed under Culture, Poetry, The Arts