THE TWO WILLIAMS by Anthony Gardner

Recent travels have brought to mind two poets. Several weeks ago I was in Ireland, and thought inevitably of Yeats, whose poetry illuminated my own upbringing there. A fortnight later I visited Wordsworth country, which I’ve come to know only in the past few years. What, I found myself wondering, would each of these great writers have made of the other’s milieu, had Wordsworth not died fifteen years before Yeats was born? And what would they make of their domains today? 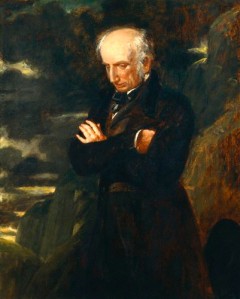 My Irish visit focussed on County Laois – not a region strongly associated with Yeats. But the Georgian mansion in which I stayed (now beautifully and painstakingly restored , as a hotel) was instantly evocative of his ‘Upon a House Shaken by the Land Agitation’, celebrating the virtues of gracious living:

‘…the sweet laughing eagle thoughts that grow
Where wings have memories of wings, and all
That comes of the best knit to the best…’ 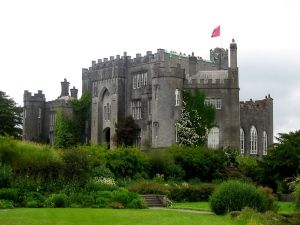 Many such houses were burned to the ground in the 1920s, and those that survived in the area have had widely different fates. Birr Castle remains the home of the Earl of Rosse, though its grounds and Victorian observatory are open to the public; Stradbally Hall is the setting for Ireland’s leading music festival, the Electric Picnic; Leap Castle (the country’s most haunted) is being restored single-handed, by a professional tin-whistle player, Sean Ryan.

In the Lake District, I visited the village of Lorton, four miles from Cockermouth (the town in which Wordsworth spent his early childhood). Lorton’s most famous inhabitant is an ancient yew tree, to which Wordsworth devoted a short poem, including the lines

‘This solitary tree! A living thing
Produced too slowly ever to decay;
Of form and aspect too magnificent
To be destroyed.’

This has proved over-optimistic: the tree is only half the size it once was; but it is still an impressive sight, and the fact that Wordsworth made the pilgrimage to see it brings a small thrill.

Wordsworth did not, to my knowledge, ever visit Ireland, nor Yeats the Lake District; the one place they had in common was London. The fact that Wordsworth, the great poet of nature, should have written the most famous of all poems in praise of the capital – ‘Upon Westminster Bridge’ – has always intrigued me. It is curious too (though in keeping with the tradition of the Irish artist in exile) that Yeats’s most famous poem, ‘The Lake Isle of Innisfree’, was inspired by a shop window in the Strand:

‘I will arise and go now, for always night and day
I hear lake waters lapping with low sounds by the shore.
When standing on the roadway, or on the pavements grey,
I hear it in the deep earth’s core.’

Wordsworth might have found in this an echo of his own ‘Lines Composed a Few Miles Above Tintern Abbey’, with its gratitude for memories of nature ‘’mid the din/Of towns and cities’. But I doubt that he would have thought much of Yeats’s lake and ‘bee-loud glade’: it’s far too tame, a world away from the grandeur of the Cumbrian scenery ,which formed his own sensibility with its ‘huge and mighty Forms’. The waterfalls and seascapes which characterise Yeats’s early West of Ireland poems would have left him equally unimpressed, for all the delight of fairies dancing

Yeats’s Celtic Twilight is a soft, dreamy thing which the harsh winds that blow with ‘strange utterance’ through Wordsworth’s ‘The Prelude’ might rip away in a moment.

Let us turn the tables, though, and imagine Yeats visiting Wordsworth at Dove Cottage. He would certainly have approved of the domestic set-up – Mary and Dorothy Wordsworth, indulging William as he himself was indulged by his young wife Georgie. But the building itself? Surely not in keeping with Yeats’s notion of the poet’s role in society: for him the Duke of Urbino’s court or Lady Gregory’s Coole Park were where a great artist belonged, at once creating beauty and finding inspiration in beautiful things. Even the much larger Rydal Mount, to which Wordsworth moved in 1813, would hardly fit the bill.
Perhaps Wordsworth takes him across the fells to visit the family’s old home in Cockermouth. Now owned by the National Trust, it ranks second only to Cockermouth Castle in the town. ‘That’s more like it,’ thinks Yeats; but Wordsworth has a bitter tale to tell about the aftermath of his father’s death, and the failure of John Wordsworth’s employer, a landowner on a grand scale, to repay an enormous sum owing to the family. No wonder he doesn’t share his guest’s enthusiasm for the splendid dwellings of the rich.

He might approve, though, of the home Yeats creates for himself in later life. Thoor Ballylee in County Galway is a ruin restored

‘With old mill boards and sea-green slates,
And smithy work from the Gort forge…’

but even after refurbishment it’s pretty uncomfortable. To Yeats its greatest importance is as a symbol from which he draws inspiration for ‘The Tower’ and other great late poems. Wordsworth is stirred by ruins, too, from those of Tintern Abbey, to the ruined cottage which symbolises a peasant family’s suffering in the eponymous poem.

Can we picture the two men working side by side as Wordsworth did with Coleridge? Not easily. For one thing, Wordsworth likes to walk while he is composing, while for Yeats writing is ‘sedentary toil’. But from time to time he climbs to the top of the tower and looks about him. How different Galway in the 1920s is from the gentle countryside of his youth!

In the final part of ‘Mediations in Time of Civil War’ he sees phantoms of hatred sweeping across the sky in a ‘rage-driven, rage-tormented and rage-hungry troop’.

Perhaps Wordsworth accompanies him up onto the roof after dinner and they confront the tumult like a pair of King Lears, the wind blowing their white hair into halos. But I suspect not: Wordsworth has seen enough of bloody civil strife during the French Revolution – for him such things are best considered in the light of a new day, as in ‘Resolution and Independence’:

‘There was a roaring in the wind all night;
The rain came heavily and fell in floods;
But now the sun is rising calm and bright;
The birds are singing in the distant woods…’

For today’s visitor to the Lake District, these lines recall the terrible floods which assailed Cockermouth and Workington last winter. I think Wordsworth would be impressed by how his birthplace has picked itself up again, and reassured that the stoicism of the local people still endures – though saddened by the way in which traditional agriculture has been eclipsed by tourism.

As for Yeats’s homeland, it is significant that when Ireland was forced to accept the EU’s financial support a few months ago, the Irish Times quoted his ‘September 1913’ in its leader:

‘Was it for this…
…………that all the blood was shed,
For this Edward Fitzgerald died,
And Robert Emmet and Wolfe Tone,
All that delirium of the brave?’

Only Yeats at his most magnificently scathing could do justice to the ignominy brought upon his country and the spectacle of picturesque landscapes lost to thousands of unfinished houses.

It is possible that the two great poets would not have got on at all. Wordsworth was not known for his kindness to younger writers, and made a poor impression on Keats when the latter came to pay his respects. Yeats counted Wordsworth among his early heroes, but was more critical of him in middle age:

He strikes me as always destroying his poetic experience, which was of course of incomparable value, by his reflective power. His intellect was commonplace and unfortunately he had been taught to respect nothing else.

Nevertheless, roaming the countryside together, I think they would have found shared sympathies – for example, their concern for ordinary people, such as the shepherd deserted by his son in Wordsworth’s ‘Michael’, or the old pauper in Yeats’s ‘Adam’s Curse’ breaking stones ‘in all kinds of weather’. Indeed, if I had to choose the poem by Yeats that brought him closest to Wordsworth, it would be his description of his ideal reader, ‘The Fisherman’:

‘….his sun-freckled face,
And grey Connemara cloth,
Climbing up to a place
Where stone is dark under froth,
And the down-turn of his wrist
When the flies drop in the stream;
A man who does not exist,
A man who is but a dream…’

Anthony Gardner April 2011. The public domain photos are Wordsworth by Robert Haydon, Yeats by Augustus John, Birr Castle, The Lorton Valley, Westminster Bridge and Hall, painted in 1808, a year after Wordsworth declared ‘Earth hath not anything to show more fair’ and Dove Cottage today. Anthony is profiled below and his novel ‘The Rivers of Heaven’ is published by Starhaven.

Filed under Community, Poetry, The Arts

One response to “THE 7TH PHOENIX ARK CULTURAL ESSAY”