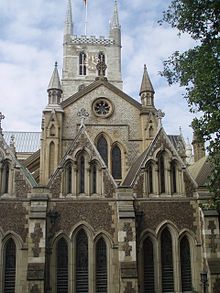 One of the most famous of all Shakespeare’s soliloquies must be Henry V’s immortal “St Cripsin’s Day” speech, but few know its special significance to a Southwark audience, in particular at the Globe. Agincourt of course took place on October 25th 1415, the feast of Crispin Crispianus, brother Saints who would have had special significance to soldiers because they were the patron saints of cobblers and shoemakers. Of course Southwark, as well as being theatreland and crowded with taverners and watermen along the river and Long Southwarke, the great thoroughfare across the bridge, was, as an area of ‘the stink trades’, butchery, tanning and leather working, also a great centre for cobblers. Indeed, when Henry VIII called St Saviour’s ‘a verie great churche’ it was also at a time when he granted incorporation to the Guild of Leatherworkers and one Leonard Scragges as Warden. The associations with the leather trade would continue, particularly in the presence of one Thomas Cure, Warden of St Saviour’s, as Phillip Henslowe would become too, and saddler to Queen Elizabeth I herself.

The Cures became a prominent Southwark family and are mentioned several times in Al Rowse’s book on the astrologer Simon Foreman, who specifically referenced visits to the Globe to see Macbeth and The Tempest. There were two Thomas Cures, father and son, but one Cure attended Foreman’s wedding, further along the river in Lambeth, in the Church of St Mary’s Lambeth, which today is the Garden Museum. Elias Ashmole, William Tredescent and Captain Bligh were all buried there, but Foreman’s house was just across the road, all in the shadow of the beautiful Elizabethan building and seat of the archbishops of Canterbury, Lambeth Palace. There is a wonderful inscription on the wall outside St Mary’s regarding a bequest of £100 to be used for the education of two local boys, yearly, but which specifically forbids it to ‘Watermen, chimney sweeps and Catholiks’!

The social role and purpose of the church was one that would be specifically challenged in Southwark at St Saviours in the days when Henslowe was a Warden and also running his theatres and the Royal Barge House, along with being ‘Master of the Game’. Then a scandal erupted around their use of alms for the poor and the building of a huge new refectory, when the number of Vestrymen had risen to 80 strong. An act was even mooted in the parliament, though in the end the Wardens appeared to have reformed themselves. They were already running a local school and alms house though called Cure’s College, which appears constantly in the records I was searching through in my hunt for Edmund Shakespeare. It stood on Maid Lane too and by the 18th Century had become a forbidding stone institution around a central garden. It was founded though in 1588 in the Will of Thomas Cure, who died in the same year as Edward Hunt, that owner of the Vine Tavern on Maid Lane and direct descendent of John Le Hunte, one of the Brethren of that Brotherhood of Our Lady of Assumption at St Margaret’s Church on Long Southwarke, repressed at the Reformation. Cure’s bound will is one of the more remarkable documents in a collection I think so important I even approached the Liberal MP Simon Hughes to try and establish a special Southwark-Shakespeare collection, though to no avail.

There will be a further blog of the importance of Southwark to the Reformation battle itself, especially in a church that lay at the beginning of the Canterbury Road, where Becket had preached, and which later became highly prominent in Mary’s attempt to take England back to Catholicism too, because she staged the Marian heresy trials inside the church. But Thomas Cure was of a very Elizabethan religious stamp, veering towards that puritanism that would spread in London closer to James’s I’s reign, at least on the surface. His will establishes provision for 16 local poor, men and women, but also the rules under which the college functioned. So they had to kneel at dawn and dusk, on the ringing of the hand bell, and recite the Lord’s Prayer. They had to work for their upkeep too, and Cure laid down specific fines against brawling, swearing and fornicating. It all makes starker reading in the light of Southwark’s especially colourful reputation, that land of theatres, brothels and gamboling houses, but is absolutely the prototype for the hated Victorian Workhouse. Except in Shakespeare’s day it was a much humbler affair with the records full of little payments to buy a cloak or hose, stockings, for one of the boys or girls, to send for a Doctor, or to buy bread. I have wondered if Phillip Henslowe’s own hand is on those records, as he continued to fill his purse from his entertainments, but it gives a fascinating picture of local life and of the very thin social support networks they had.

For writers in the Sixteenth Century it was hard to survive, books and plays often supported by private donations. We seem to have returned to that time, in some ways, so please realise that the research on Edmund Shakespeare and Southwark represents two years of unpaid work.  If you enjoy these blogs then and can afford to support Phoenix Ark Press, please donate below.  Many thanks.

The image is a Wikipedia photo of Southwark Cathedral, renamed St Saviour’s at the Reformation but originally part of St Mary’s Overies priory. Thomas Cure was a Warden here as was the famous Phillip Henslowe and for a time his Son-in-Law the actor Edward Alleyn. Shakespeare’s youngest brother Edmund was buried inside the church on December 31st, 1607, at the age of 27.