WALKING WITH THE BUSHMAN!

A SHORT WALK IN THE KALAHARI 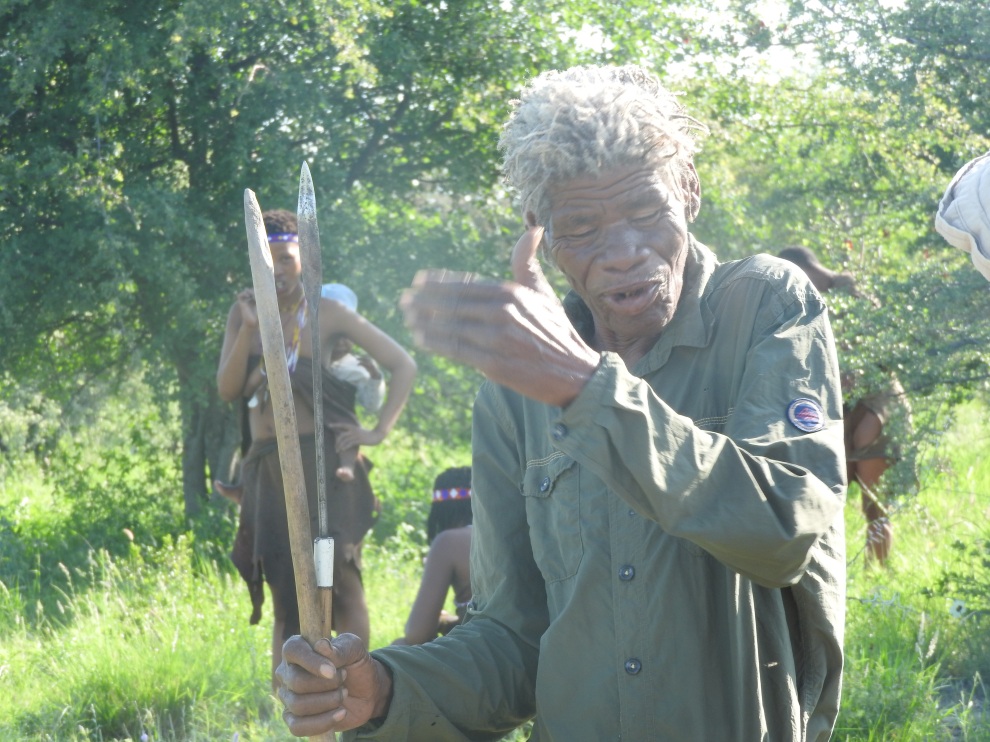 His name is Cobra, and he has been working with the excellent, high end travel outfit in the Kalahari, Uncharted Africa, for years. I think he started as a boy with the hunter Jack Bousfield, who was killed in a plane crash, where his son Ralph was injured, back in 1992.  So Ralph founded Jack’s Camp, in honour of his father, and so came San Camp and Camp Kalahari too, all in reach of each other, here in beautiful Botswana, on the edge of the Makadikadi salt pans. I’ll blog more on the wonders and style of our visit, of lionesses, meerkats, and an evening ride among three thousand Zebra, during the migration.  We were thoroughly spoilt and the only decent thing is to share just a little of it with you here.

But first to something Uncharted offer too, which is a two hour walk with the ‘Bushmen’. Of course nowadays that term is decidedly politically incorrect, for the San and Koi peoples, among the oldest cultures and people of Africa.  I do not mean it to insult, far from it. Their guttural, clicking, beautifully sing-song tongue is the root of the Xhosa language in South Africa, though linguistically they have long split apart.  I think we all felt a little awkward as we rounded a Wait-a-bit tree, heavy with Long lensed cameras, our bronzed skins fizzing with mosquito repellent and wearing shades, to see a small group of adults and children, all apart from Cobra, in traditional dress.   The group come for around three months, paid by Uncharted, though I have no idea what, then are replaced by another group, so inevitably came the potential feeling of a stage set, and a forced exercise. 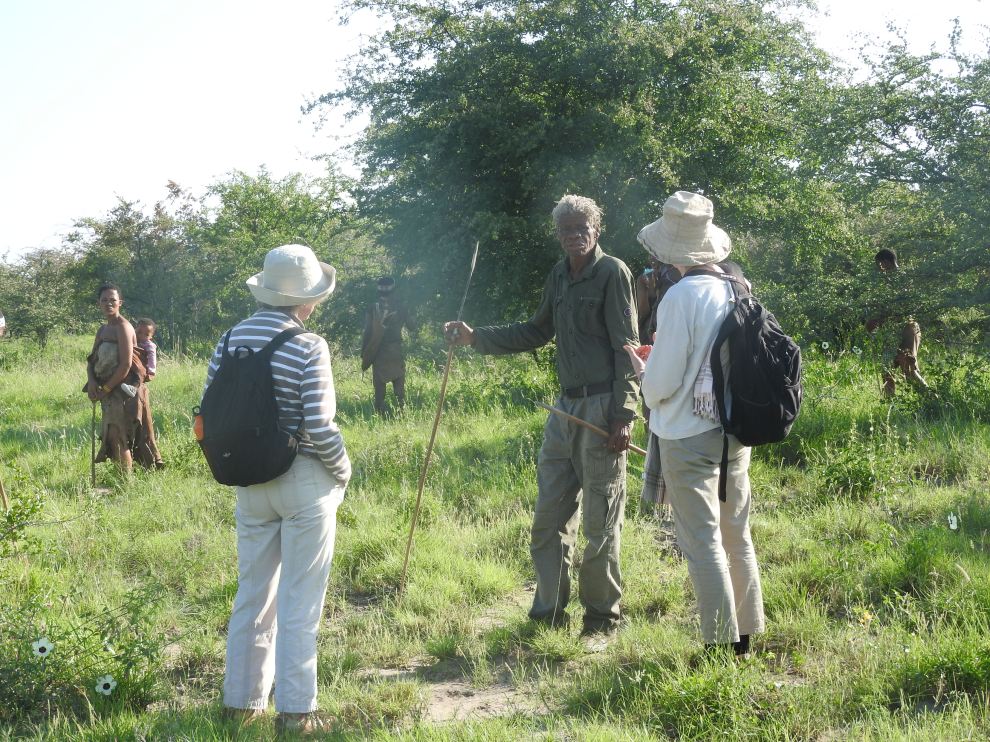 But very quickly we were put at our ease, after many handshakes, reassured that these guys like it, including being photographed, and actually several of the bare breasted women dandling their dirty babies hardly seemed phased at all.  Somewhat bemused, or amused. So off we set, wondering what on earth we were doing, to stop now and then, to pull up a bitter herb, a xoi, or wild carrot, or pluck purple pepper pod leaves that help cure a dry cough, or try and understand their mesmerizing language.  I’m afraid I still haven’t grasped names, but a couple of the younger guys and girls had very good English too, to translate, and somehow the awkwardness eased, as we started to enjoy a walk in one of the largest, and hardest gardens on earth, the Kalahari.  Several of the men carried delicate asagais, I’m not sure of the bushman word for spears, made from the hard wood of the brandy bush, and one arrows and a bow, though technically, like everyone else in peaceful Botswana, they are not allowed to hunt. I have a problem with that, because although I thoroughly approve of Botswana’s general ban on Big Game hunting, which should be adopted across Africa, what will it do to their unique culture and lives, among such an un-invasive people?

The story of the Bushman is probably as sad as much of the rest of the World.  Now perhaps two thousand live a truly traditional, nomadic life in the Kalahari, and have been moved especially from the central parts around the Diamond reserves, though ‘Conservation’ is generally the excuse, to the edge of towns or their own communities. Diamonds!  Those beautiful, over valued stones we like to give each other on bits of gold as a symbol of Love ad Eternity, that generally are pretty useless, especially when we’ve ruined the Wild and the World for Eternity.  But never make too many assumptions.  One of the guys smiled knowingly as I asked him what he wore in Frances Town or his village. Jeans and Tshirts was of course the answer, sometimes, especially in town, as I learnt he was studying Engineering.  But on we trecked, this mobile outfit from Botswana’s equivalent of Central Casting breaking away to pluck a purple pepper pod,  or show us an animal track.  Especially the elder guys were watching and knew, and you knew too that if you were ever lost in the desert, forget Ray Mears or Bear Grylls, it was these guys you wanted with you!

The ground was dry, despite the unusually heavy rains this February, and soon the girl I had been trying to vaguely flirt with, or prove I wasn’t an arrogant Westerner to, was crouched on the earth, teasing the guys about their jokes that this was women’s work, digging for a special water tuber which they scrape like a carrot, then squeeze, using the thumb as a spout, to drink the milky, bitter fluid. That I tried too and it tastes like pure water, when your brain separates out the turnip bit.  Back she placed it in the ground too, for another day.  Meanwhile the men were collecting dry Zebra dung, twigs and fine kindling to show us the primal art of Fire.  Cobra was trying to upstage them though – they came from different tribes and didn’t talk the same language – scooping out the earth to catch a scorpion, that he played around with, then popped between his lips and teeth, so he could clean it and show the eight eyes, and eight spots on its underbelly, that relate it to a spider. I tried to talk to Cobra, about what he thought of tourists, or the problems of his people, and though there were lots of reassuring ‘goods’, his extraordinary face seemed naturally lined with doubt.

But the fire was going, the group and the little children decidedly interested in their own stuff, and so began a kind of song and a game I think I’ll never forget. Men opposite women, it was a version of Paper, Rock, Fire, though with moves and signs for Lightening and Steenbok instead. But they so got into it, laughing with delight, that fascinating machine-gun rapid song language rising to some enchanted drumbeat, we were all laughing too and slapping our chests in rhythm wanting to really be part of it. The Game was done, the fire out, a smoke in a bone pipe complete, I had been dying to try too, from a tiny wad of tobacco couched between one of the lady’s breasts, that makes you wonder how many pula they earn, and just like the water plant, the fire remains were pushed into a hole and smoothed over. Gone.  One more thing left, as I tried to throw a spear, the little snare they had made under the tree, for birds, or even the tiny deer we had seen everywhere.  They laughed approvingly as I was persuaded to put my hand through the vine-made noose, to touch the bark gum bait and I was caught.

Now we were wandering again, the sun high, feeling as if we had touched a little bit of a very innocent Eden.  It was all there.  All you really need in life.  Food. Water. Fire.  And a laughing song-game. Then suddenly they began to break away, after all of them shaking our hands once more.  We of course had no idea where we had wandered in the bush, but there we were back near their camp, like turning the corner to the semi-detached.  Cobra and his fine, long faced compatriot, such a dignified, beautiful face, hopped in the jeep with us for a lift back to Jack’s Camp, but it was over. It will go on.  For the other tourists, a walk in the Kalahari, though Uncharted offer a trip where you can live with them, without any other creature comforts. But for any staginess, any odd conjunction of Ancient and rather Modern, that many of the Botswanans around looked at somewhat sceptically,  I was deeply touched. I thought of all the problems, all the fights and horrors of the World, of the grossness of Donald Trump and all that Power, the difficult issues of Conservation too, and precisely because these gentle, threatened people seemed to leave no harmful mark, felt very genuinely that we could all take a purple pepper pod leaf out of the Bushman’s book.