The Durrells on Corfu, The White House and The Black Book

With the hit TV drama on the Durrells going to another series, it was interesting to see the Bristol TV unit vans camped below the Achilleon palace on Corfu and meet some of the locals who have been used as extras.  Except the Government seems to have  tightened up the rules, so no one who has recently retired is allowed to work as an extra. 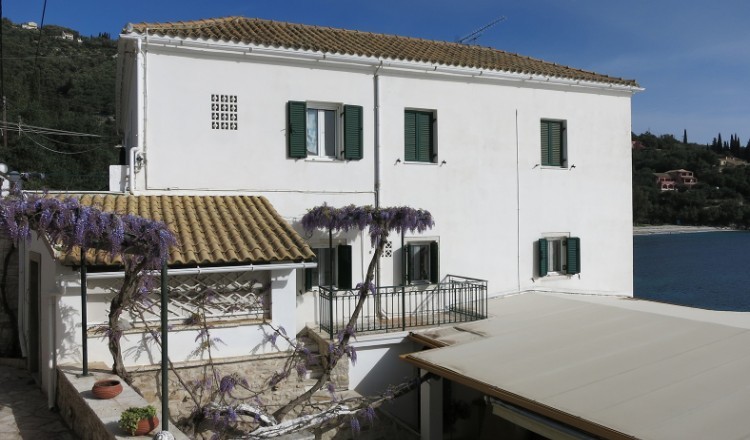 It was for a different reason though we made a little pilgrimage to that beautiful bay at Kalami and the White House. We went not in search of a popular and rather innocent British TV series, but one of the Durrells themselves, Lawrence Durrell.  Gerald Durrell’s elder brother of course led the Durrell family out to Corfu in 1935 and made it a base for his own extraordinary and highly controversial writing career, that almost won him a Nobel Prize.

Camped in that White House, which is now a pleasant restaurant billed for ‘fine dining’, a doubtful concept in Greece, with a little plaque on the wall and various old photos and books by reception, it was here that he penned his scandalous novel, The Black Book. Although, talking of his ‘white ark’ in the novel, Durrell signs it ‘the house of Anastasios Athenaeios, Kouloura’.  In fact Kouloura is the bay right around the corner, but it seems perhaps that Kouloura then was a district name and this was where The Black Book was indeed written, a Black Book for a White House, though elsewhere it says they rented the house in April 1937.

I met the son of Anastasios Athenaeois, now 82, his father having died several years ago and tried to glean some reminiscences, just as I have heard various bits of gossip, good and bad, about Lawrence on Corfu, from leaving various children, to not being especially nice. But sadly the grand old man has been ill recently and especially last year, like his wife, and seemed weary of the subject, or unable to remember. He said he wanted to sleep, and so I left him gazing out at the beautiful blue Ionian, now dotted with too many smart yachts, and noisy water-skiers in the bay.  Not an unpleasant sight, but just as Gerald Durrell complained of over development when he returned in the eighties, so hardly the isolated and utterly authentic paradise the Durrells must have experienced first hand.

Lawrence Durrell’s famous and very charming travel book on Corfu is of course Prospero’s Cell, where the claim is made that perhaps this was the isle of Prospero and Shakespeare’s The Tempest, and that witch’s name Sycorax is an adaptation of Kerkeira, the island’s Greek name. Charming, though not especially convincing, but I wonder how many have read The Black Book. Banned, or unpublished for forty years in Britain, it has variously been billed as obscene, pretentious or unreadable.  Although TS Eliot, who was managing editor at Faber and Faber at the time and one of Durrell’s great supporters, billed it as the salvation of the English novel.

Like Durrell’s journey to Corfu itself it is certainly the young author’s manifesto of intent and liberation. Highly experimental, it attacks what Durrell called ‘The English Death’ and so all the mores, forms and conventions of the time, with sexuality and sometimes obscenity as its first weapon. For that it is a fascinating, if an often opaque read.  It, like his other novels, or indeed his personal biography, is of course far darker than the likes of enchanting TV series. But Durrell certainly found freedom in it, as he did on Corfu itself, where he lived and loved with his first wife Nancy, and without it would probably never have been able to reach to the heights of the far more narratively accomplished Alexandria Quartet, his true masterpiece.

It was of course the celebrated American writer Henry Miller, author of the likes of The Tropics of Capricorn and Cancer and lover of Anais Nins, who so inspired Lawrence Durrell, after the young writer found the celebrated and also scandalous Tropic of Cancer in a public toilet.  He sent The Black Book to Miller, suggesting he might throw it in the Seine, but instead Miller published it privately in Paris and they became life long friends. Indeed, on the eve of the second war, Miller came out to Corfu and the White House himself, staying for a year, and together, bathing naked, though by then the now balding 52-year-old Miller was billed by locals as ‘the Old Man’, eating, drinking, talking, working and enjoying the glories of the island.  They are still always there on Corfu, as is much of that liberated spirit, but it would be wonderful to find out more of their time there, before the true stories are really lost forever.

David Clement-Davies is an author and planning a book on Lawrence Durrell on Corfu. He would be grateful if anyone on the Grapevine has any stories of the Durrells, especially Lawrence, relayed or first hand.  You can write here or to dclementdavies@aol.com Thank you.

2 responses to “The Durrells on Corfu, The White House and The Black Book”