Nancy Meckler’s quirky production of Shakespeare’s greatest tragedy at The Globe somehow fails to reach the heights of Kevin Mcnally’s deeply moving and highly original portrayal of King Lear. In a lovely, lucid and rich performance, that at times pierces to the deep heart of such a mighty spirit, wrestling with both the self-imposed overthrow of his kingdom and his own mind, in an apparent search for true love. Reflecting, beyond the savagery and ambition of his bad daughters and the world out there, the ultimate inevitability of impotent old age and death. 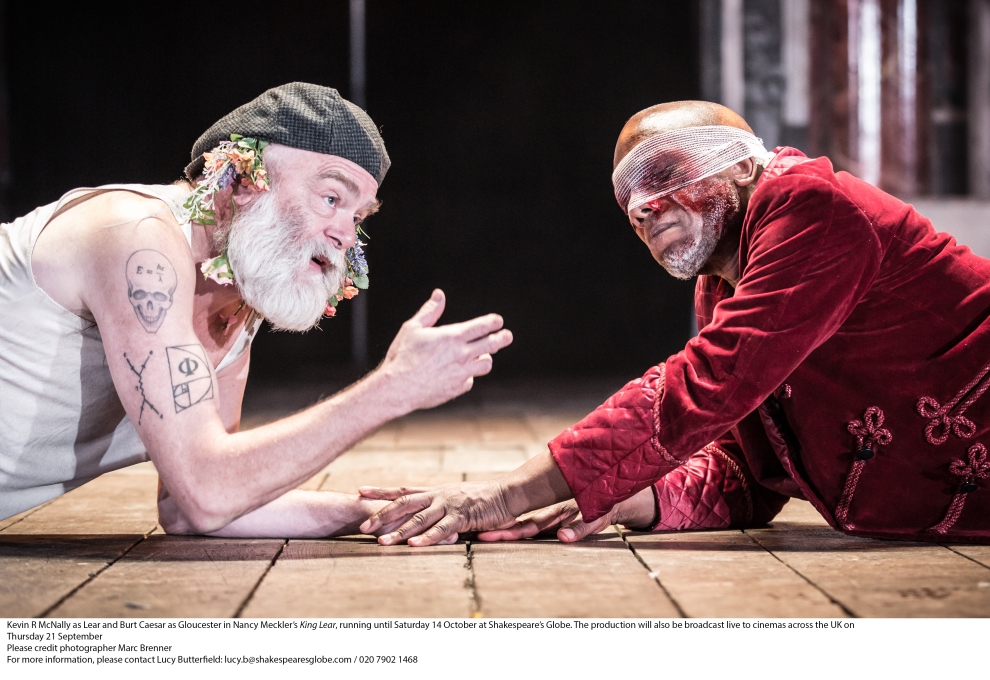 Nowadays though perhaps you have to reach for the program to get to the twin pillars of whatever the supporting architecture is, and here it’s essays on ‘comedy’ and ‘homelessness’. Without droning on about the problems of messages swamping real drama, like that awful production of a Tale of Two Cities at Regent’s Park Open Air, here the same concerns are sounded, but to far better effect. With a troupe of vagrants, who might be actors capable of being Kings or Desperate Men, repossessing a derelict property, swathed in canvas cladding and Keep-Out signs and littered with warehouse parcel cages, where a lot of the most gruesome bits are enacted, though in fact not gruesomely enough. Because Lear is a play about being made to see the horror, inside and out.

I take slight issue with the fact that they then put on a kind of gypsy play, so justifying Loren O’Dair’s mumming, violin-playing Fool and the final masque-dance, though not at all on the grounds that you shouldn’t make Shakespeare contemporary, or even change the text. But because the writer who writers trust above all knew his stuff and when he wanted something to be a ‘play within a play’, like that vital Mouse Trap in Hamlet, he put it in for a reason. Otherwise it’s a given that we’re in a theatre and, above all at the wonderful Globe, in that ‘Wooden O’. 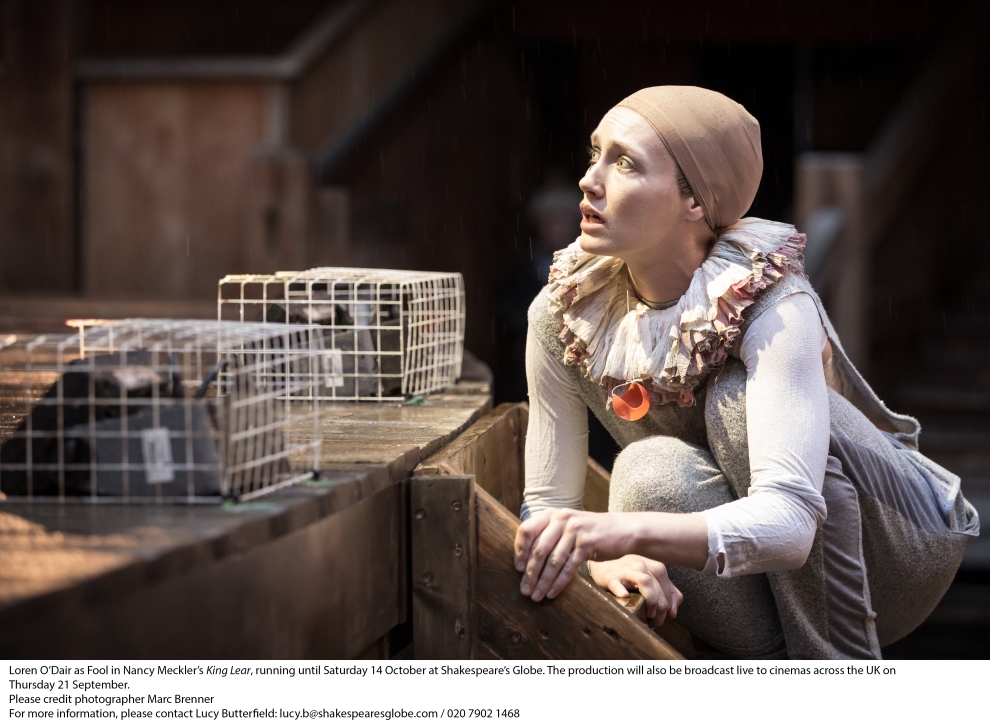 Setting that aside, the reason it works better is because it reminds us, unlike Two Cities, that ‘migrants’ or the homeless are real human beings, not just yobbish victims, or some easy label either, and capable of squatting, repossessing, threatening or having a good party too. That gives some energy to what ensues, in a play that so wrestled with the terrible social realities of its time and can be astonishingly revolutionary. Phoenix Ark Press has long been writing that the divides of today might be reaching back to the Sixteenth century.

In fact, with the triumph of Much Ado About Mariachi (see review below), the Globe should be reinforced – as it is being – as the stage for actors working in a vital Shakespearean ensemble tradition and interacting with the groundlings. Just as the cast bustle on stage before the audience have barely sat down, or stood up, and exit in similar fashion. The problem is, if you’re going with that, this production does not make nearly enough use of such a space. Which is why I rather woke up when Joshua James’ at times excellent semi-academic Edgar comes into the cage in the pit and smears himself with excrement. It is true at the proscenium level too, where Much Ado became a dance of brilliant invention. But this seems rather flat and oddly stuck behind the fourth wall, I think actually raised, Trump-like, by making something too politically messagy.

Meanwhile to that essay on comedy. Any Stand-Up will tell you biting comedy is the other side of tragedy, that the blackest humour takes you to the Dover cliff edge, and Lear is ripe with it. Perhaps so going for comedy is what frees the cast and Mcnally initially, and in being allowed to be actors too, and makes his Lear so very striking and human. Accessible is the word, in such contrast to Anthony Sher’s at the RSC. In fact you are allowed to like Lear from the start, though perhaps a little too much. But his re-emergence with flowers in his Citizen Smith beret and reencounter with Anjana Vasan’s very good Cordelia are superb. 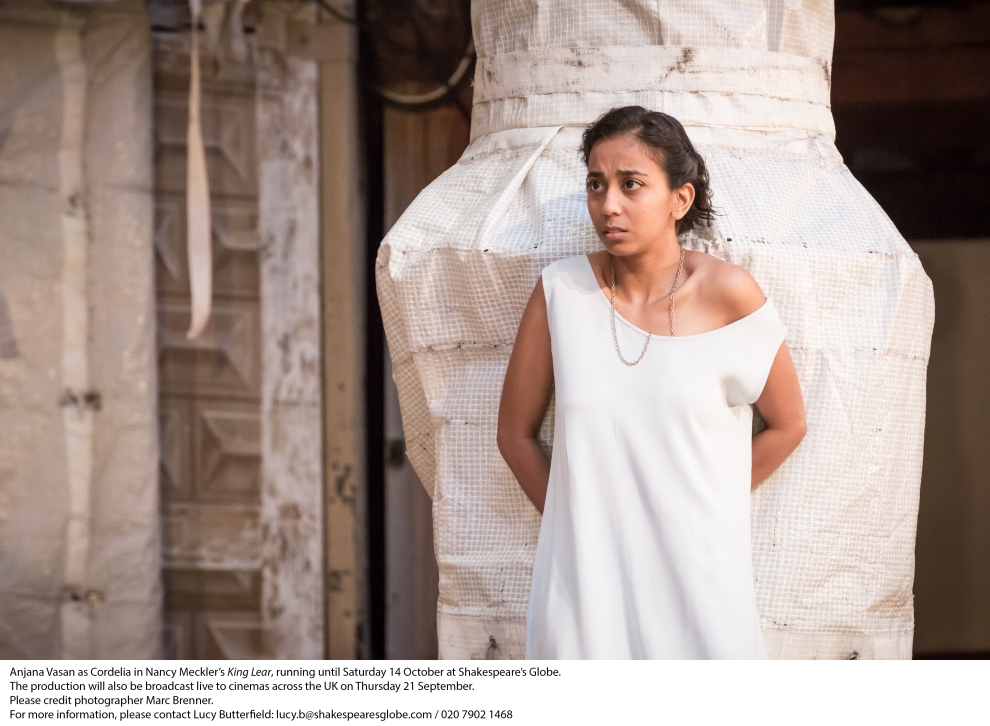 The problem is that sometimes the search for the gag becomes irritating. Just as you get why the L’Ecole Jaques Lecoq trained O’Dair is a suitably haunted Pierrot figure, you wonder why a character that is such an essential part of Lear’s and the play’s entire psyche, seems so absent. The biggest case in point though is Edgar with Burt Caesar’s blind Gloucester at the Dover cliff of transformation, throwing away some of the lines for the gag, as if he’s just making it up in improv.

In fact that authoritative flow of language and poetic vision is so much what the entire play is about, held in the longer soliloquies, especially if you’re wanting to justify the theatre itself as almost Sacred Space, revealed by stripping off the cladding. It is a vital rebalancing of both Lear’s and Gloucester un-anchored minds and imaginations, their moral compasses too, and so ours, to rediscover a common humanity and purpose, if it can in. So creating a kind of miracle of hope and balance, in the face of that running metaphor of seeing and blinding, of those inner and outer worlds. There is very much the sense of secular pilgrimage in that act, as there is in the semi-Christian role of Kent, that can’t be got at just by kissing a crucifix, although Saskia Reeves as Kent is generally excellent.

So then the difficulties with this Lear must really rest with the director Nancy Meckler not grasping harder for the intrinsic wholism of the great play, inside its own poetry and consciousness, and how all the characters so ‘talk’ to each other. Lear’s reference to faux-mad Edgar as his Athenian and Philosopher, for instance, are not just quips, but because in the context of a world so turned-upside-down, Poor Tom’s veiled wisdom and pretend madness really does serve that purpose. If you interrupt that internal dialogue of ideas you also interrupt the actor’s ability to connect with each other, as they do in later scenes, like the magnificent confrontation between Goneril and Thomas Padden’s fine Albany.

In that, perhaps the director forgets you can be over democratic too, especially if you need Shakespeare as ultimate authority, in neglecting Hamlet’s injunction to scruffy, focus pulling actors in general to ‘speak the words as I set them down’. Namely as Shakespeare sets them down. The point about that Wooden O, at the very inception of modern theatre, and a new defining of the English language too, is that to Shakespeare the vowels of text and place were almost synonymous and in his case you should always trust the writer’s pillars of wisdom, first through the page then onto the stage.

Just as, while the ‘Stomp’ style use of drums to generate both the storm and war has some effect, it could be done with even more commitment, to get a real street beat and thrill the audience. But more importantly it somehow pushes out that other vital element of Lear – Nature – healing regenerator, or red in tooth and claw. “Thou Nature art my Goddess”. Odd then that for a play they so underline is about being dispossessed, I could not really feel the cold, the wet and really the storm either, even partially in the open air. Which physically and metaphorically echoes the blasted heath Lear’s mind threatens to become, one that is exactly that for so many of the homeless. It is feeling those things, inside and out, for imagination is also how we see the world, yet with such a philosophical maelstrom at work too, that surely makes you reconnect with the plight of migrants and the homeless, after all out in the real weather, and the whole of tricky humanity too. Shakespeare above all was wary of being didactic then and concerned with the magic he wrought on his audience inside the theatre. Again, on the nature theme, Cordelia is also a semi mystical and redemptive Nature figure and that is not directed enough. Although, since I think Shakespeare must have nearly touched madness himself, because King Lear so brilliantly explores the agonizing rupture that can occur in the human psyche when the powerful masculine is separated from the truly honest feminine, both potentially inside all of us, some of the supporting relationships are very well played. Emily Bruni is particularly good as Goneril, especially discovering a seething sexuality in Edmund’s vital manhood, and Ralph David’s Edmund is suitably vigorous and in charge of his destiny, for a while. So though, perhaps a laurel must be given back to Nancy Meckler’s making Kent female and having Pierrot take off the Fool’s cap to reveal a vanishing woman too. Perhaps the performances will coalesce more to reach for what must support those two central men though, the King and Gloucester, and which, with Mcnally in the hot seat, might have made this a great Lear.