It’s hard to know what to write about Christopher Shinn’s much awaited new play Against at the Almeida.  Set partly in a Rocket Factory in Silicone valley, which is really us of course, with a barely veiled reference to the Mars-wards-looking US tycoon Elon Musk, and with a cast worthy of the paparazzi waiting at the door afterwards, the presence in the audience of Mark Rylance too, it oddly failed to blast off. It is good, and the cast at times great, but….

Starring  the excellent and highly sensitive Ben Wishaw as the searching billionaire Luke, given a message from God to ‘Go where there’s violence’, it then has him descending like the Secret Millionaire to explore themes of suicide, isolation, addiction, love, sex and above all American violence, in settings from prisons to the home, as his own inability to build relationships is reflected in his fragile love affair with the excellent Amanda Hale. Considering the play begins with a police crime-scene cordon, removed to reveal a TV set broadcasting the increasing horrors of the World and  a Colombine-style school shooting, you might guess where this is all leading.

Nowhere really. It almost takes off in the second half, and we should have come in with the conversation between Luke and a brilliant black junky whose solution is indeed Mars, and the play’s strength is its attack on stereotypes.  But since it is actually rather an intellectual play, it tries to do too much and gets a bit lost.  Or perhaps it’s telos is we really are all lost, but, if human nature is anything to go by, would be no different on Mars anyhow. 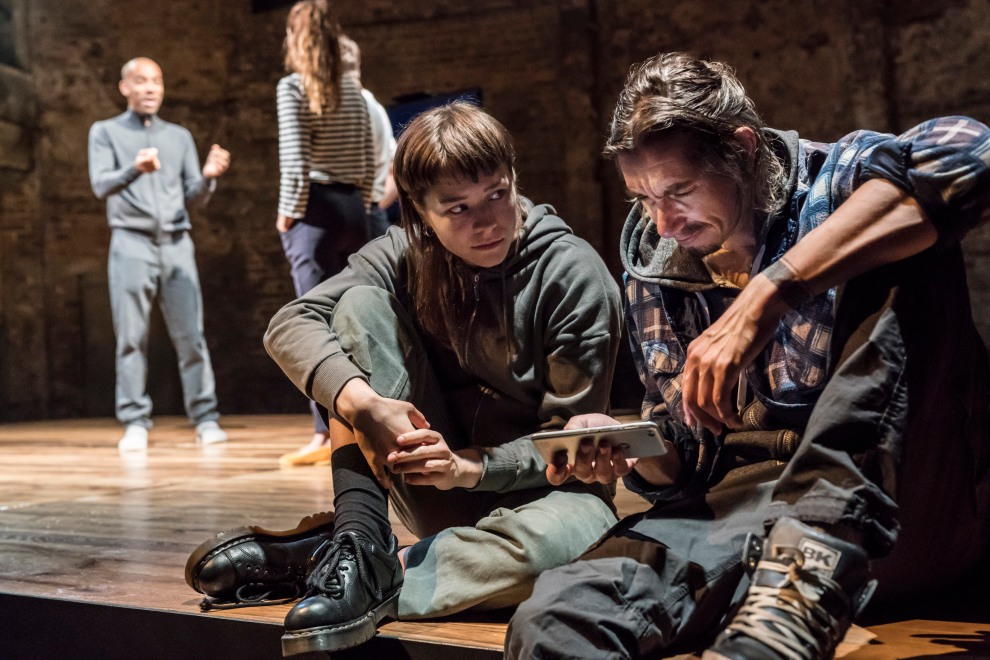 In that it has great points to make about turning back to look inside at our own natures, our most basic humanity , or lack of it, the empty cults of celebrity and billionaires like Musk too, and is surprising in its attack on supposedly progressive Liberal thinking, especially at the Almeida.  As Emma D’Arcy’s sensitive literature student trying to write a story about her lack of love and connection in her polyamorous relationship is persuaded, or half intimidated, by her supposedly Liberal, gay ex-sex worker professor, played superbly by Kevin Harvey , that she must change the story to really open her mind.  She should have given him Atomised to read.  In a play so much about a search for human intimacy, it highlights how impossible it becomes when even the violent denouement is live-streamed.

In defiance of that is the reappearing bed that urges the central characters both toward loving sex and commitment, a meaning and intimacy everyone is looking for, paralleled by the pair at the bottom of the pile, faced with sexual exploitation, sort of, and working in the food processing department of the much reviled Equator enterprises, in the play’s desire to circle the Globe and all human experience.  It doesn’t make it, obviously, but it has moments of high tenderness, some lovely acting, wit and style. The problem with the Capitalist machine is sounded, and perhaps Silicone Valley and Ayn Rand are to blame for a great deal, but is that really what Against is against, or should we all be getting up against one another even more?  Not with tales of child rapes relayed in one of Luke’s encounters, or perhaps our increasing awareness as a species that helps to paralyse Luke in the first place.  The doubling of characters played by the same actors, like the angry, exploited, exploiting ex sex-worker professor and Equator’s CEO, to place us all in the same system, is a good touch.

This philosophical ramble has some good and convincing scenes, but in throwing in stuff about the repetitive patterns of news, the violence thrown at us all the time, the dislocations of the internet and, in a world where money is King, the search for hope from the captains of industry, who have no more idea than the rest of us, you want to come up against some sturdier and more focused social and political arguments.    Just as the new religious injunction to Luke to ‘Come’ is no pun to hinge a play around, not least because it only works in the English language. But then again, perhaps a playwright’s job is simply to reflect the zeitgeist of his times, and in being lost, it does that.   On the whole, although I commend the cast, Ian Rickson’s directing, and several scenes of high drama, as a play I’m neither for nor against.

David Clement-Davies saw against courtesy of the Almeida. Against runs until September 30th. For tickets Click Here

Filed under America and the UK, Culture, Environment, The Arts, Uncategorized