DRAGON IN THE POST HITS THE BBC AND THE KATIE MARTIN SHOW, IT MAKES ABSOLUTELY NO DIFFERENCE, SO DCD CHEERS UP AND GETS BACK ON THE SOUTH DOWNS! 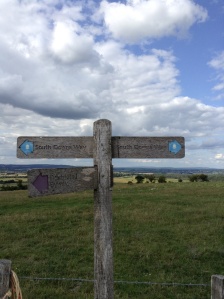 WELL,  there you go. Picked up from Storrington today and drove back to Southampton with Alex for a slot on the Katie Martin Show on BBC Radio Solent. Which made me absurdly nervous and forget most of the things I wanted to say. Katie Martin is very nice, and certainly onside, besides, celebrity media likes positive, but I guess you always feel you’ve a bigger story to tell! Not only that but with one contribution today, perhaps it ain’t about a Media rush at all, but me! Hey oh. You can hear it all, here and now, which exactly like the project is up On Line only for the next seven days:

Which is partly why it was so great to walk it all off again and rejoin the South Downs Way, at the Chanctonbury Ring beyond little Washington. I’m afraid I owe the way a few miles. If you can find some dragon of storytelling here though it’s at these strange, rare ring mounds, and the track that winds up through knotted, tangled and ancient forest, back to the escarpment and the effort to rise above it all. They are either barrows, hill forts or just strange eruptions that curl up the land itself and in them you can see all the power of ancient myths and storytelling, like Mary Stewart’s dragon in The Crystal Cave. But after scrubby Southampton it was a joy to get back up there, under sun and cloud and set off again. Only a two hour straight walk, with no breaks, but always more surprises. So now you realise you’re getting closer and closer to the sea, after that clear, straight chalk path, with such beauty around, and quite a shock then to come over the brow and look down all the way to Brighton. Like the huge scar of a chalk quarry, that looks like a vast, white and unattended bowling alley, Brighton from the hills is frankly a blot on the landscape. Just because it’s man made and the memorial up here to someone’s “beloved South Downs” is so true, all about a love affair with the Downs growing in me too. Oh why, oh why though, did the song just before my little spot have to be Hewey Lewis and the bloody News, with The Power of Love – “makes one man cry and another sing.” If only they knew! That’s it though, it don’t take money, it don’t take fame…what will this take?

It was the stiff sea breezes gusting over the tops, in a glowing early evening, that made me feel I was already on a beach, or the downy, blowsy gentleness of it all, touched of course by the threat of power plants and Brighton Pleasure Pavillions that made everything seem at sea. But then, when the light moves and the clouds are high, when beetling track suddenly tumbles into mown pastures, these Downs not only become beloved, and feminine, and gentle, but you see entirely why England was always a part of the sea beyond and all is one. To get more real, I thought of Orwell and Animal Farm, as I came through a piglet farm, with sweet new snorters nudging the mud, then huge sows squealing in the wind, as crows lined the fencing and got a bit depressed again. So to another tip into a river valley, as the river Arun follows the Downs to the East, the strangely unnerving sight of a sign saying Eastbourne only 40 miles.  I was making for The House of The Rising Sun!

So here I sit, amazed by the beauty of the hills and light above the wimpy homes, across the car park in Upper Beeding, at The Rising Sun pub, bemused that Miss Martin’s show hasn’t made the breakthrough either, pleased by the warmth of my hosts Sue and Barry, who are preparing for their three day beer festival, in the most popular of the three pubs here, because it’s all about people, and wondering why a posh bloke like me is chatting to a geezer about selling kitchen units, next to saucy postcard wallpaper, courtesy of a certain Dupenny down in blousy Brighton. Still, with all I know since coming to the country about real pub life, I must just have more fun. They’re a nice lot here, salt of the beeding earth, tattooed and all, and I am turning to comedy, as I chat to a guy with a cocktail business in Brighton called Mixology and try to mix it up. I have mucked up the route tomorrow, having travelled further than I thought, so will keep you posted. Sue does a cracking walker’s breakfast and the son of the house, going on about writers, how he isn’t educated or a reader, but loved The Shadow of The Wind, thanks to his ex girlfriend, may have saved my life in reminding me what it’s really about – writing and weaving inspiring stories. A girl at the bar who had gown home for a bit to watch a Bake Off moved me too in talking about Children’s Books and how people just don’t read any more.

You can crowd fund Dragon In The Post, right now, pronto, by going to Indiegogo.com and looking it up!

You can also sponsor my walk for the RNIB at JustGiving.com/David-Clement-Davies