I thought of a great newspaper travel column idea once, walking along down Fifth Avenue in New York. Namely broadcasting snatches of conversations overheard abroad, foreign or home voices, in different places.

One just happened walking down the Via della Croce in Rome, with some American voices.
Gorgeous foreign scene: Tired, rucksack carrying family, walking towards the Spanish Steps.
Blonde woman: ‘Honey, I’ve no idea, I think we’re lost.’
Pause.
Dark man: ‘No honey, just up there’s the American Steps.’
Er – no, but hopefully just a slip of the brain! 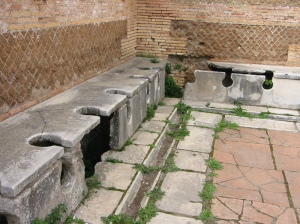 ‘How come some people don’t wash?’ said Santiago disapprovingly, looking at some grubby, foot-sore Roman pedestrian, as we sped down the LungoTevere out of Rome, and towards the wine dark sea. ‘Perhaps they haven’t got a shower!’ someone else suggested, humanistically. We weren’t on the way to bathe in the Mediterranean, we were on the road to dip our historical imaginations, if that’s not too much of a mixed metaphor, in the astounding ruins at Ostia Antica. Ostia means mouth, and the city grew up as a feed port to Rome, on the estuary mouth of the Tiber, before it fell into terminal decline around the 7th Century AD.

What is it that really fires an historical imagination though? For me, as a ten-year old boy, I remember it was the small, significant detail, which so vividly captured the ancient every day. Hence goggling at the ruts in the cobbled pavement at Pompey, where chariot wheels had scored deep grooves into the thoughtless stone. At Ostica Antica it was sitting on a simple loo seat, a perfectly rounded half-hole in a slate of marble, inside low stone walls, long before our flushed, taken-for-granted days of Thomas Crapper. Or leaning on a bar counter, in a perfectly deserted alleyway, where once Romans and Ostians would have stopped for wine or beer, or perhaps a wild boar sandwich.

Actually, at Ostia, it is far more than the significant detail, or even a sudden encounter with a floor mosaic, a half statue, or a fresco. I think wandering around yesterday was the most magical experience of ruins I’ve ever had. The remains of the city are huge, and what is most delightful is that in early March at least, almost completely deserted. Romans, most of the year, are making for the sun worshipping sands of Ostia’s big beeches, now 3KM away, after centuries of tidal retreat. Perhaps they should build a temple to King Canute. Most visitors to Ostia Antica too still stick to the central via, past the wonderfully preserved theatre, and up to the impressive capitol. So I jumped off the beaten track and picked my way through abandoned mill houses, villas, shops and weed-strewn streets, trying to summon back the vanished inhabitants, washed and unwashed. I had an encounter with the ‘Gods’ too, among the sun-brushed pines, in an open field, ringed by pilasters and edged by a main road, where unregarding cars add an electric buzz to the mystery. There stood the temple of Attis, fronted by goat-hoofed statues of the God Pan, proving it’s all about the piping, and behind a gate, the Egyptian war Goddess herself, who, with her starry crown, looked like a recumbent version of the Statue of Liberty. Ate she is, after the Romans adopted her, and in Mark Anthony’s murderous, revenge summoning curse in Shakespeare, following Julius Caesar’s murder.

But apart from the spiritual side of Roman life, it is of course Roman civic utility that is most in evidence at Ostia. Hence the huge apartment complex, the Villa of Diana, built around a central fountain and courtyard, where Mr and Mrs Roman lived in the closest proximity. It is the equivalent of a modern city housing estate, without the concrete horrors and the drug dealers, perhaps. But beyond the temples and administrative buildings, the magnificent Capitol, and the all important theatre, what really dominates Ostia are the Baths of Neptune. Built, I think, after Hadrian, the bath complex, one of several, is huge, still containing the most astounding mosaics, and there all Ostians became not only the great washed, but the very fit too, since the Frigidarium, Tepidarium and sweating hot-houses were bounded with Gymnasia for sport and exercise. They also contain public toilets, since most Roman houses did not have private loos, or bathing facilities. Senator, priest, patrician and plebeian must at times have rubbed shoulders there, sitting in windless splendour to shoot the breeze, do the business, or wonder where it was all leading. Quite rightly Santiago would ask that all important and still unanswered question later: ‘Were they Unisex?!’ Filthy man. ‘Marcus,’ I heard an imagined voice whisper though, as I turned for home in the glowing evening light, ‘you know that fellow may be an awful Pleb, but he really is very smart and clean.’ ‘Ah yes, Tullius, but then he comes here every day because, quite naturally, he doesn’t have a shower.’ DCD