This is a beautiful little production of one of the seminal plays of the Twentieth Century, the programme probably rightly claims changed the face of theatre forever, Samuel Beckett’s Waiting for Godot.  Not least because it opened last night at that great playhouse In Soho, The Arts, where the very first British performance was staged back in 1955, directed by a young and yet to be ‘Sir’ Peter Hall, who said at the time he didn’t understand it,  to a near cultural riot. One audience member was heard to remark “No wonder we lost the colonies”. “The Definitive Homecoming” declares the theatre billboard today, returning Beckett’s name to West End lights by throwing in an exhibition about the play and playright too, and they may have it right, as right as you can be, of course. 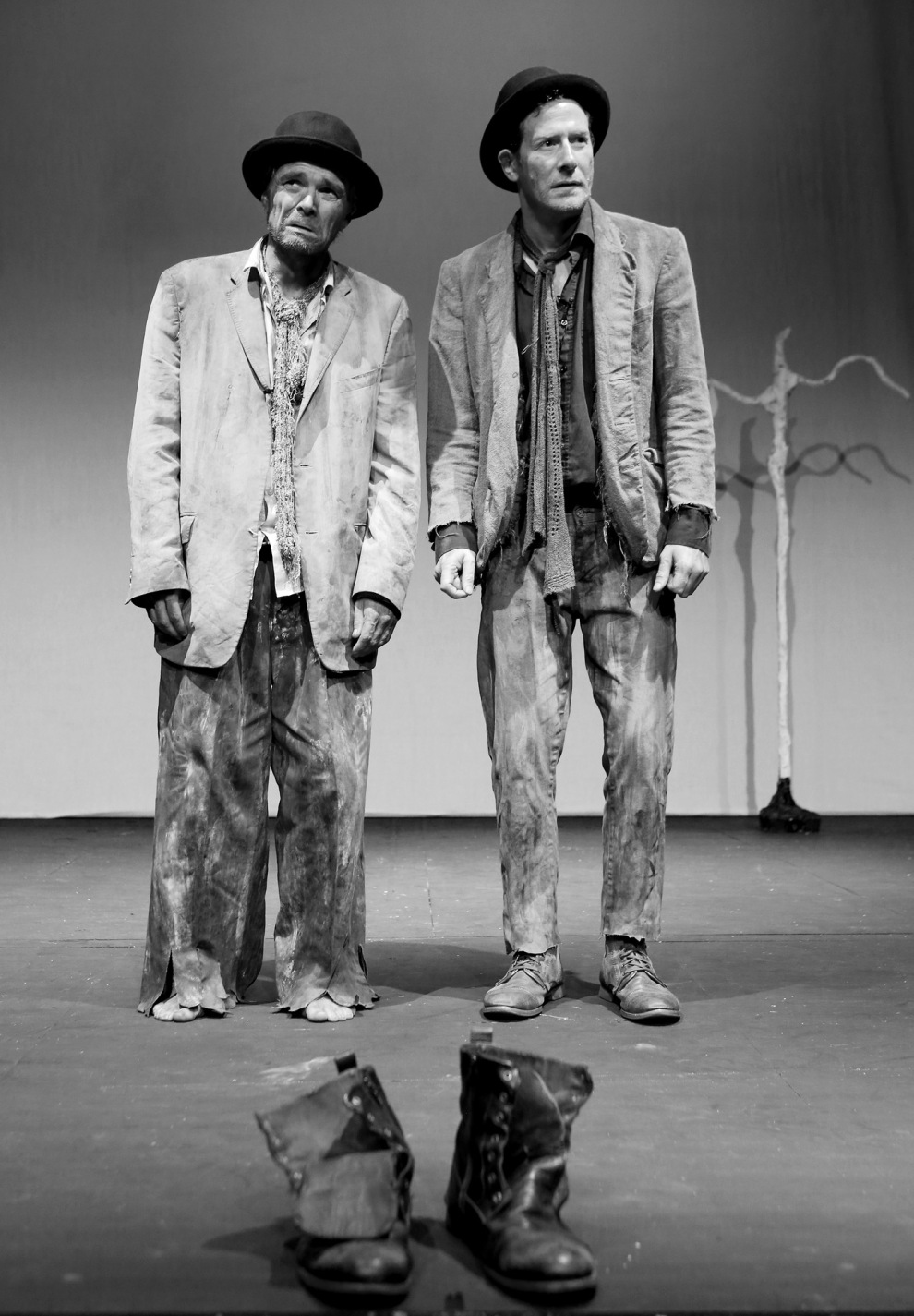 Director Peter Reid’s excellent notes point out the difference between those two gigantic Enfant Terribles of literature, and famous collaborators in Paris, perhaps a little like those aburdist wayfares Vladimir and Estragon themselves, Samuel Beckett and James Joyce.  Namely that while Joyce was a synthesiser, trying to encompass all and everything, Becket was an analyzier, trying to reduce things to their very core.  Indeed, one of his own comments about his little masterpiece Catastrophe, delineating the fate of an actress in the hands of a brutal and omnipotent director, the fate of us all these days, is that drama should be like a sculpture that stands the test of time and cultural change. Of course, time has moved on since 1955, nearly everyone has died, as you do, while Beckettian pauses and ponderings have become givens and literary tropes. But without placing Beckett himself in a reverential fish bowl, it’s Reid’s clear love of Beckett, and he has directed all his plays, and of theatre, that makes this such a lucid and sensitive production.

In near painted-on, Theatre-Jaques-Lecoque rags, with a famous pair of boots and that theatrical stone and coat-hanger-like tree, and backed by a projected sky and strip of sand that might be the path to Golgotha, or nowhere, which when a blue moon rises turns this piece to something of a Haiku, Nick Devlin’s and Patrick O’Donnell’s marvelous Everyman tramps weave and unweave Beckett’s linguistic and philisophical magic.  We are at once in a theatre, and not, at once inside human consciousness and failing to ever escape, at once with the absurd and the utterly tragic.  Of course Beckett would always smile when critics, agggggh, pondered the ponderous question of whether Godot was supposed to be God, with a long white beard or not, a God that never arrives, and the original, in French, was simply called Waiting.  But I had forgotten that Godot is actually a character that potentially exists inside the structure of the drama, and so begins Beckett’s extraordinary intellectual, philisophical and emotional games, ones that involve a lot of that Comedy too, Beckett so loved watching at University.  Though some of the physicality, in a very physical production, should be worked on. 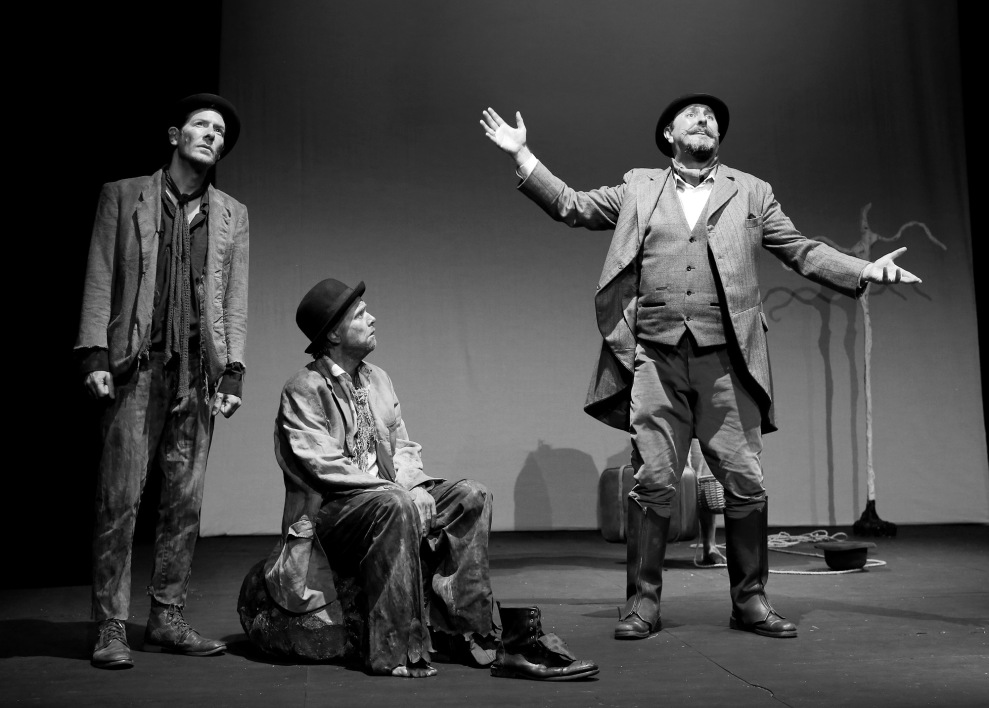 Why the adjective beautiful was used with precision though, So Help Me God, is that for me this production so touches Beckett’s profound compassion and humanity, knowing full well the horror and brutality too, his electric wit, but also the core of his own poetry, the shere beauty of his language, that sings out in some of the monologues.  Part of it is the skill of the actors, and all are exellent, Paul Kealyn’s buffo Pozzo horrorfyingly appealing, Paul Elliot’s grotesque Lucky rising to a shattering crescendo when ordered to ‘think’.  Part of it is the tender chemistry between Devlin’s and O’Donnell’s co-dependent tramps, though the little boy should be given a credit, and at times there could be more swordplay, variation, indeed cruelty between Vladimir and Estragon. But another reason is one Beckett himself might not have approved of, in fact proscribed against, namely that Estragon and Vladimir talk in Irish accents, in a show that has transferred from Ireland.  “We are Irish”, says Reid though, and since Beckett too came from somewhere perhaps very Irish indeed, and that is a compliment, maybe that allows the actors to sit so comfortably, so humanly, so beautifully within the text, as players acting their hearts out, and characters that have become old friends. But also because that search for God or meaning in Beckett does seem to rise out of a perculiarly Catholic, Irish tradition, in a society haunted by Religion, while that profound undercurrent of radicalism in the play, also echoes the political realities and tensions that have so plagued England, Ireland and the English Language.  Beckett of course tried to go beyond, to sculpt a masterpiece beyond time, yet this production indeed gives the Master a worthy Homecoming.