THREE FREE LIONESSES OUT OF THE CAN! 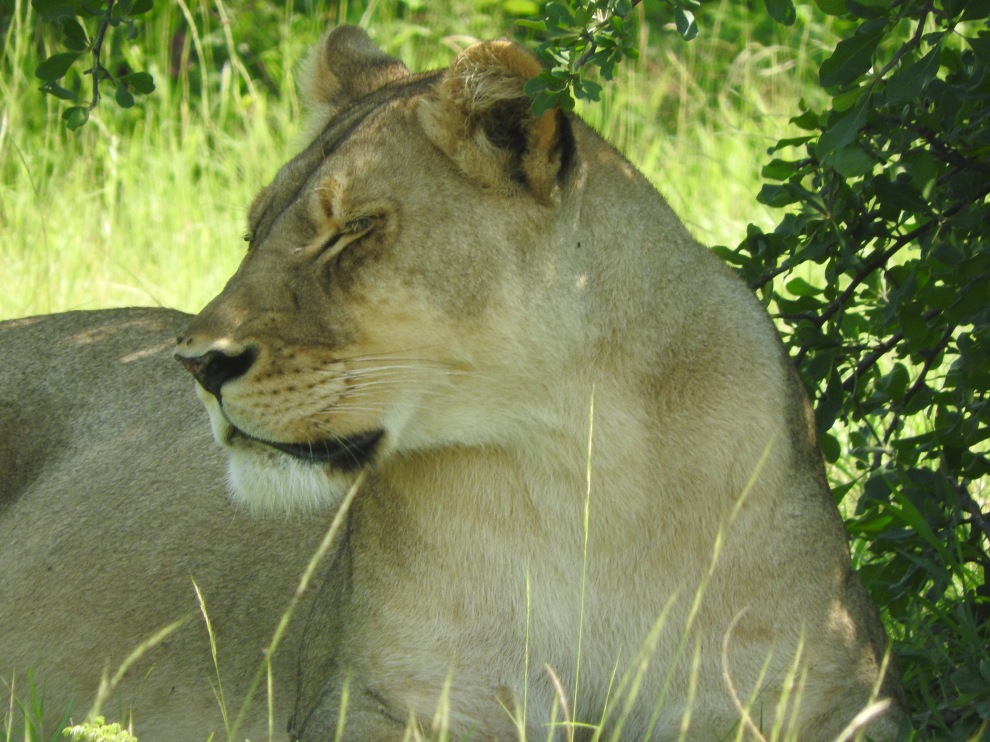 She doesn’t have a name, such a beautiful wild lioness, even though the guides on our trip had at least got her used to the jeep.  We were about twenty five feet away, after having searched for two days, seeing old, dry tracks, and the remains of a zebra that had been killed months before. Then, bumping through the bush in the Kalahari, that lions will use as shade and cover to take animals, Jonah suddenly spotted what we couldn’t see at all.  He swung the jeep around and there they were, not one but three lionesses, the two more retiring companions almost lost in the tangle of Wait-a-Bit trees next to her, stretching and yawning in the African heat. Breath taking.

I don’t know if I could see the anguish in her face that my companion Arabella did, the tension and strain, that made us warier of moving where we sat. Apparently lions’ eyesight cannot easily distinguish shape and colour, they see blocks, so they react to things breaking out of the frame. That anguish though is because she had had two cubs, a male and female, but a lion, not the father, who had been following these three females around the area, had first killed the male cub, then driven out or killed the female too.  Perhaps new cubs will succeed the little tragedy.

How gloriously different though, after our experience of meeting two lions in South Africa in a 4 hectare fenced enclosure in Plett Bay, to see these Queens of Jungle and Bush in the true wild and led by such a proud, beautiful, astonishingly powerful creature.  The story of lions though, and the collapse of populations in the late Twentieth Century, is as tragic as  so many wildlife stories.   It has a particular nasty Human side too, in the existence of what they call ‘Canned Hunting’, not here in Botswana where any such hunting is illegal, but in South Africa. Where it is legal to breed lions in captivity – there are something like 8000 captive lions there today – for the private zoo trade, or ‘Petting Tourism’, where Europeans pay high prices to supposedly suckle them for Conservation, but where their final destination is really death at the end of some high paying ‘hunter’s’  rifle. In South Africa three lions are shot for sport every single day and they go for around $60,000.  I don’t know if Donald Trump’s sons have taken such lions, but they have certainly been in the Press for their enthusiasm for Big Game sport shooting. The shameful, cruel and scandalous practice of Canned Lion Hunting, animals often drugged and baited before an easy and senseless kill,  I am sure the likes of that lion of a man Nelson Mandela would not have condoned, was confirmed in 2014 by the South African Supreme Court under Jacob Zuma’s administration.

The irony in it though is that lion numbers in South Africa have probably gone up because of legal breeding.  Yet, compared with this vision of the true wild in Botswana, what kind of life do those captive animals really have? What kind of sport is it to slaughter them too? Or is that killing of this lioness’s cubs in the wild part of a brutal truth always in the background of existence, human and animal, with increasing populations and ever shrinking habitats, we just have no answer to?  Yet, for all the brutalities of life and the world, surely Man’s real talent could be to avoid that kind of senseless ugliness, and what the wildlife organisation Four Paws describes as “selling brutality”. In the Kalahari, with the raising of endless miles of fencing, partly to try and stamp out Foot and Mouth disease, European meat markets are so sensitive to, natural migration routes have been disrupted and both Zebra and Wildebeest populations decimated.  Inevitably predators like lions have suffered dramatically too.  But at least that hot day this beautiful February in Botswana, three graceful lionesses enjoyed their freedom, only caught in the photo can, and the true wild was there, in all its paradoxical wonder.